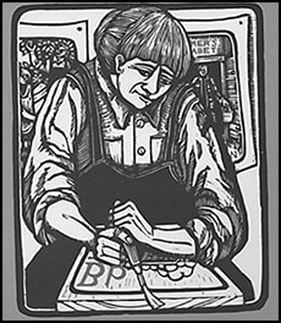 Mary began drawing and painting at an early age and fell in love with woodcuts when she created her first relief print in the fourth grade. It was a 3" X 4" lino block of an angel with "NOEL" at the bottom—a valuable lesson in the need to reverse words when creating a woodcut. Mary's first finished print read, "LEON."​
​
Undeterred, she continued to create linocuts until attending Smith College, where she studied printmaking with one of the great twentieth-century printmakers, Leonard Baskin. She began to work on woodblocks and never lost her enthusiasm.

Mary grew up on her grandfather's small farm just outside Washington, DC. Her grandpa had a few thousand chickens and a flock of geese that menaced customers who came to buy his eggs. Her uncle grew vegetables and ran a farmstand. Understandably, Mary's interest in gardening developed at an early age and continues to this day. As a child, Mary spent many days exploring the woods and fields on her pony, Patsy.

After graduating, Mary moved to a small hill farm in northern Vermont. She and her husband farmed with horses and oxen, chickens, a Jersey milk cow, sheep, and a goat for a very short time. They raised three sons who helped with their large gardens and maple syrup operation. Mary's time on the farm with her family became the inspiration for many of her prints.

After three years of teaching in one of the last one-room schools in Vermont, Mary decided to earn her living selling woodcut prints. She began producing prints in black and white, printing each block by hand. Eventually, she began adding color by hand-painting each black and white print (a non-traditional approach, to say the least). Finally, Mary found an old Vandercook proof press (the Rolls Royce of proof presses) and began using that to produce her unique prints.

In a few instances, a block proves to be difficult, in which case, Mary uses a small offset print shop in Barre, VT, to produce the print. Each print, whether printed offset or by hand, is individually hand-painted (if a print is offset printed, that is noted on the site).

In the 1970s, Mary began to illustrate children's books and has contributed to over fifty books, including Snowflake Bentley (winning the 1999 Caldecott Medal for the best illustrated picture book).​

After years of creating hand-painted prints, Mary returned to designing black and white woodcuts based on her fifty years of printmaking. She is especially interested in working with simple shapes. Mary's work is available at:​